History of Wat Sri Suphan Srisuphan Aram or Wat Srisuphan or Wat Suphan Located in the south of Chiang Mai city Located on the space between the inner wall and the outer wall In the past, it was a temple in the category of Ubosot, Wat Nantaram.

(1) Srisuphan Temple during the Mangrai Dynasty

There is an inscription of Wat Srisuphan, which is made of red sandstone. The inscription of the history of Wat Srisupan in letters of the pod Kham Message in the inscription of Wat Sri Suphan As evidence to confirm that Wat Sri Suphan, the center of this community Built in the reign of Phra Muang Kaew or Phaya Kaew King Mangrai dynasty (2038 – 2068), the golden age of Lanna that was passed down from the reign of King Tilokrat (1984 – 2030) and Phaya Yot Chiang Rai (2030 – 2038) At that time, 20 kalpana fields and temples were given to Wat Si Suphan to have officially started Wat Si Suphan community since then.

1774, Phaya Cha Ban (Boonma) Chao Kawila, together with the Thonburi army, expelled Burma from Chiang Mai and later in 1782 in the Rattanakosin period. Has appointed Chao Kawi Theater in Chiang Mai In this era, people were allowed to settle in Chiang Mai, where the craftsmen made silverware to set up their homes around the Sri Suphan Temple. It was born as a new community, all of whom are residents of the Kong River in later times in the reign of King Kawiloros Suriyawong. The sixth ruler of Chiang Mai (1856 – 1870) appears to be evidenced that His Majesty, along with Usa Chaya, was the model in building the Viharn of Wat Si Suphan in AD 1222 (1860)

During 1857 – 2420, which corresponds to the reign of King Kawiloros Suriyawong. The sixth ruler of Chiang Mai (1856 – 2413) and the reign of King Inthawichayanon 7th Chao Chiang Mai
(1870 – 2440) in the pre-sermon period The temple is also a source of dharma and a learning center for people in the community who send their children to be ordained until they have the opportunity to become a pastor until the sermon period. In the early stages, the monks played a role in teaching at the temple and persuading the boys to study by using the temple hall as a place to study. “Elementary Education Act 1921 ″ There was a conscription of boys-girls to enter schools until 1923. Khun Chanya (Kim Seng Siem Phakdee), Chiang Mai City Education Officer. Together with Phra In Ta Thammawong, Abbot of Wat Sri Suphan at that time Set up an elementary school at Wat Sri Suphan by having faith in the temple is Nan Kham Pun. Serving Chiang Mai Revenue Department and Mae Oui Kham Onkarat, the royalty from the river basin, donated property to build a temple pavilion used as a place. The boy and the girl who study Both in the community of Wat Si Suphan and neighboring communities have come to study

During World War II, Japanese soldiers used Wat Sri Suphan as a location for soldiers and detention of prisoners of war. Causing Wat Srisupantong School to close teaching and learning When World War II ended, the conditions inside Wat Si Suphan consisted of grasses, bamboo, Chacha trees, Tan and Lan trees. Including a group of crows and birds to make their nests Later, in the period of Phra Kham Tan (Nan Kham Tanchai Kamrueng), the abbot of Wat Si Suphan at that time, joined with the group of faith at the temple. Construction of the temple wall following the reign of Phra Maha Kham Khan Thiplo, including two pavilions at the east gate of the temple.
When completed, it has arranged a celebration of the walls and temple pavilions.

1957-1967 Phra Kru Sathit Boonyanan (Phra Rector Bunchom Sunantho) Abbot of Srisuphan Temple and Teacher Eea Wichian Warehouse, Headmaster of Wat Srisuphan School, raised money to build a 2-storey school building, completed in 1964, all the assets of the temple were donated to the Chiang Mai Municipality under an order announced in 1963 by Wat Srisuphan School has the school color is yellow-red, the yellow represents the temple. The red represents the nation. 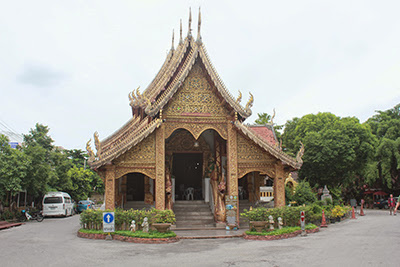 (7) Srisuphan Temple in the present era

Restoration of the temple

Wat Sri Suphan Has been renovated in a large time in the reign of King Kawiloros Suriyawong, the 6th Chao Luang Chiang Mai (1856 – 1870), His Majesty has been pleased to build a large bell with two million, ninety-five thousand and six hundred gems. By bringing the bell at Phra That Doi Suthep It could be said that The temple of Wat Srisuphan, the restored version of King Kawiloros Suriyawong, is one of the temples in Chiang Mai that connects the faith of the northern lord

1994-1998 Wat Srisuphan Committee, under the leadership of Phra Provost Pitak Suthikhun Abbot of Wat Srisuphan Has restored the temple again With the support of a large number of faith groups accepted as hosts. As a list of the hosts appears in various parts of the temple, for example, Mom Tada. Warlords Mengrai Inside the restored temple Phra Kru Phitak Suthikhun receives cooperation from artists in Chiang Mai and abroad. The painting and design of the lighting, colors and elements beautifully harmonize with the work of the devout chef of the temple.

2000, Wat Srisuphan turns 500 years old, the Srisuphan Temple Committee under the leadership of Phra Kru Pitak Suthikhun. Abbot of Wat Srisuphan Has organized a 500-year Lanna Heritage Fair of Wat Srisuphan during 29-31 March 2000. In such event, the 500-year-old Lord Buddha was cast by people in Ban Chang Lo community, who are also faithful to Wat Sri Suphan. 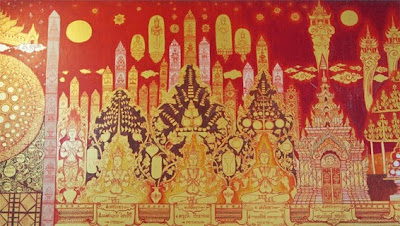 The construction of Wat Sri Suphan is a learning area of ​​the three educational systems.

Later, the Dharma has established the Sunday Buddhism Study Center in Hai Ya Subdistrict at Wat Si Suphan. By Phra Kru Phitak Suthikhun, Abbot of Wat Srisuphan Has served as an administrator of the ordinary school at Suan Dok Temple for a while And linked the ecclesiastical education with the informal education held in Wat Si Suphan

Therefore, Wat Srisuphan has a learning resource for all three systems in accordance with the Education Act B.E. 2542 complete.

In 2002, 3 communities on Wua Lai Road were Wat Sri Suphan community. Wat Muen San community and Wat Nantaram community Has cooperated in organizing activities to open up cultural and economic areas in the name Gad Mao Silver Kitchen Krua Rak – Krua Hang (read Kad Mua Khua Ngern Khua Hak – Khua Hang) Chiang Mai City Municipality in the reign of Mr. Boonlert Buranupakorn is the mayor. Been hosting a Walking Street event every Saturday since then. Is the opening of the economic area on Wua Lai Road Create a buzz to come back again. Later, many governmental organizations have promoted cultural and economic activities of the community at Wua Lai Road for a period of time until now. 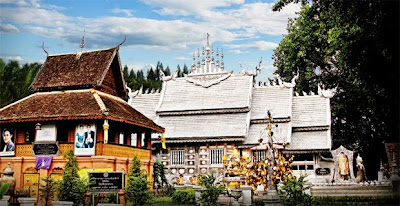 In 2004, the Srisuphan Temple Committee, under the leadership of Phra Kru Phitak Suthikhun, Abbot of Wat Srisuphan Has a resolution to proceed with the restoration Great Hall of Wat Srisuphan By using the base of thinking to bring the community treasure, namely the kitchen of money Create a work of art for the land Decorated every part of the Ubosot, both inside and outside, making it the world’s first “Silver Temple” and has been operating since then. With support from the faculty of faith both in Chiang Mai and elsewhere Continuing until now, the Silver Temple of Wat Srisuphan has a story “as beautiful as that of transmitting the world of Thao, Director General Suralai”

In addition, on the occasion of His Majesty the King was 80 years old in 2007, the committee of Wat Srisuphan, under the leadership of Phra Kru Phitak Suthikhun, abbot of Wat Sri Suphan There was a resolution to give a resolution to build a silver temple at Wat Si Suphan as a memorial of this auspicious event. Since then Wat Srisuphan received royal grace from Crown Prince Maha Vajiralongkorn to give Wat Srisuphan as a temple under the patronage of Her Royal Highness Princess Maha Chakri Sirindhorn. Lord Thi Pangkorn Rasamichot And received the royal permission to invite a 60-year anniversary emblem to decorate the gable of the temple Since 20 March 2009